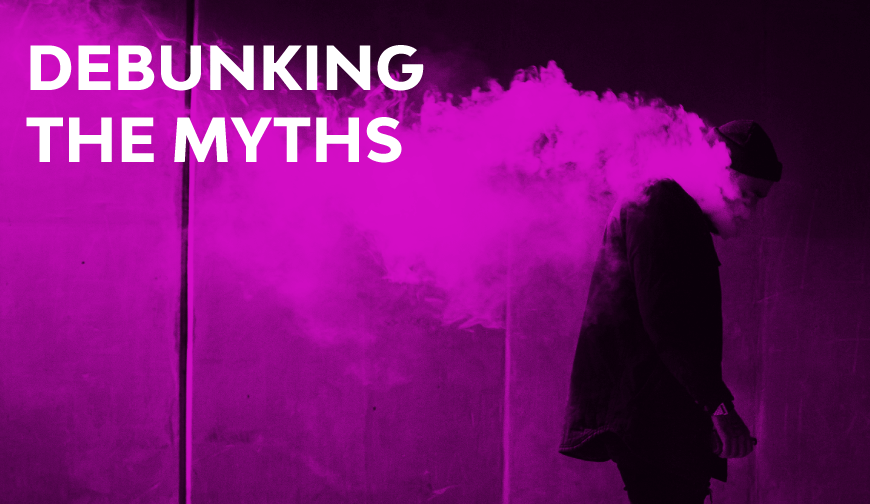 Despite the copious amounts of evidence from leading officials such as Public Health England, the NHS, Royal Society of Public Health, ASH and Cancer Research UK, among many others, e-cigarettes still face backlash.

The IBVTA found that only 17% of the public and 25% of smokers actually believe vaping to be a less harmful alternative. This is a disappointingly low level of awareness, especially considering the positive facts about vaping.

Negative views on vaping often generate from lack of knowledge and viral stories of illness related to vaping, which mainly originate from the use of unregulated devices and e-liquid.

Following this, we’ve decided to debunk the popular myth; that still have people unsure that vaping is no safer than cigarettes. With our quick guide, your doubts can be alleviated with clear facts and figures from leading officials, click a link to navigate to the relevant section:

What is Popcorn Lung?

Can E-cigarettes & Batteries Blow Up?

The widespread popularity of vaping has encouraged research into the effectiveness and impact e-cigarettes and e-liquid has on health. Here is what has been discovered so far:

Sadly, this information is often overlooked when it comes to reporting on vaping, but it is worth sharing with those who still have doubts. This information from leading experts has been pieced together over many months and even years to give a truthful and accurate figure.

TPD stands for Tobacco Products Directive, and in May 2016 the EU/UK introduced TPD requirements on e-liquid manufacturing and e-cigarette devices in a bid to make it more regulated.

Alongside this, TPD state that all bottles and boxes must contain warning signs and the advertisement of these products is strictly prohibited on TV, radio, newspaper ads and in product placement advertisements.

These regulations have been beneficial to the industry, making products more regulated and therefore more trusted.

Vampire Vape strongly adheres to the production of high-quality e-liquid in the UK and have flavours tested by third-party laboratories to ensure only the best leaves our Darwen based warehouse.

For more information, see our blog post - What is E-liquid?

What is Popcorn Lung & Why is it Not a Concern?

Popcorn Lung is often a misunderstood term associated with vaping, however, the term originated from the Popcorn industry back in the early 2000s.

This term was coined when workers in a popcorn factory developed bronchiolitis obliterans after inhaling the chemical diacetyl from the butter flavouring used to make the popcorn.

Diacetyl is fine to eat, but when inhaled can cause health problems, and this ingredient was subsequently linked to e-liquid.

In the EU and UK, diacetyl has been eradicated from trusted brands, like Vampire Vape, following the introduction of TPD requirements that insist on e-liquid being screened for harmful chemicals.

Looking at the facts, Popcorn Lung is a popcorn industry issue that drifted into the vaping industry due to flavourings used in e-liquid. It’s a misunderstood term that is used without understanding what causes it or what preventative measures are in place.

As mentioned above, all Vampire Vape e-liquid is screened by third-party laboratories before it can be mass-produced and sold. Due to our UK manufacturing processes, Vampire Vape can say with confidence that all products are fully TPD compliant and safe to vape in accordance with government regulations.

The quick answer is no - but there are reasons as to why people incorrectly believe it to be harmful. One key issue with vaping is the close links it has to cigarettes and often causes people to believe that the health concerns with smoking are the same as vaping, which of course is untrue.

A concern about vaping is the effect of second-hand vapour on surrounding people, with many falsely thinking they can contract popcorn lung, which is detailed above.

Following research, second-hand vapour has been ruled as harmless from both Cancer Research UK and then later from the California Department of Public Health (CDPH).

Government officials from CDPH tested for over 20 chemicals in non-ventilated vape shops to identify any toxic substances in the air. The tests can back as negative for any toxic chemicals which suggest that even in confined, non-ventilated areas, second-hand vapour does not affect others.

While it is safe to vape around people you should, out of politeness, refrain from vaping in people’s faces or around children.

Are E-cigarettes & Batteries Safe to Use?

E-cigarette horror stories have been frequently reported, BUT this is often due to mishandling the device or lack of safety in respect to storage and usage.

There are e-cigarettes that push out a lot of power and feature variable wattage, voltage and temperature controls, which require knowledge on Ohm’s law. These can be technical to use and can be dangerous if misused.

These devices are popular as they offer a sub-ohm vape, which is explained further here. Before the rise in popularity, many people made these devices themselves, and these unregulated devices were dangerous. Nowadays, leading brands such as Smok, Innokin and Aspire have released regulated mods with built-in safety features that massively reduce the risk of them exploding or overheating.

Another concern is the batteries that power the devices. These can pose a risk when they’re not taken care of correctly. If they are loose and come into contact with coins or keys, they can react and set fire.

See our blog on How to Take Care of your E-cigarette Batteries for more information.

The majority of reports about exploding devices are due to lack of knowledge of the devices. E-cigarettes are technical and need to be protected, especially devices with external batteries.

It is possible but highly unlikely when bought from reputable sources such as Vampire Vape and used correctly, as we always recommend you read the user manual and follow our battery safety guide.

Vaping is misunderstood, primarily because it is a niche topic that many don’t thoroughly research or understand. The majority of ‘facts’ surrounding e-cigarettes and e-liquid are spurred by negative stories that don’t identify crucial facts.

As the myths get unmasked and more officials step forward with research, vaping can become more acceptable. Such information will also break the link between smoking and vaping.

It’s awareness that will help the industry win over those who are still sceptical of vaping.

What myth have you had to explain time and time again?