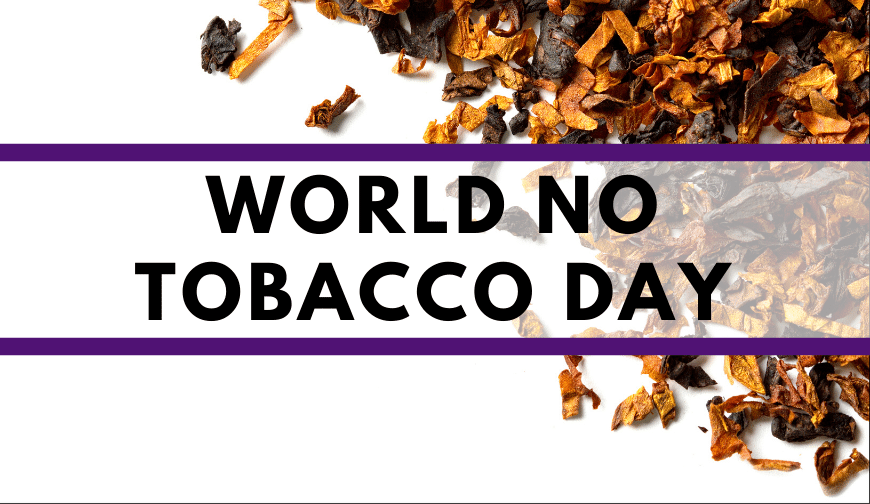 What is World No Tobacco Day?

World No Tobacco Day is an annual event which is held each year on 31st May to raise awareness of the harmful effect’s tobacco can have on the body. Each year the World Health Organization (WHO) chooses a certain relevant theme to discourage tobacco use. In 2019 the WHO focused on tobacco and lung health to raise awareness on the negative impact that smoking tobacco can have on people’s lung health and general well-being.

This year the main focus on World No Tobacco Day is to discourage younger people from tobacco and nicotine consumption. The organisation plans to expose the devious tactics set by larger tobacco corporations which hook the younger generation of smokers into their industry. Their counter-marketing campaign in response to the aggressive tactics taken on by tobacco companies intend to get younger people to join in the fight to become tobacco-free.

“Decades of the tobacco industry’s deception and devious tactics to hook generations of users to nicotine and tobacco have driven a global epidemic wherein over one billion people worldwide use tobacco and over 8 million people die from tobacco use or exposure to second-hand smoke every year.”

How can I take part?

The WHO is urging influencers on social media and people working within the popular culture industry to expose the manipulative tactics which have previously been subliminally ignored by the public. Empowering such individuals to stand up to these corporations will hopefully be creating a brand-new generation of tobacco free users.

Ditching the cigarettes if you are a tobacco user can be one of the hardest things to give up, however help is out there. The NHS provide nicotine patches, gum, and inhalers, and recently they have been recommending switching to vaping too.

It has been recently proven by Public Health England that vaping is 95% less harmful than smoking tobacco. Second-hand vapour has also been proven to be harmless by a study conducted by Cancer Research UK.

Many smokers, especially people with existing lung conditions are being urged to make the change due to the increased risk with the COVID19 pandemic, a widespread disease which drastically weakens your lungs among other life-threatening effects. Joanna Cohen the director of the Institute of Global Tobacco Control provides a deeper insight into World No Tobacco Day and how making the change can affect your health during COVID19 in the short video below. She is accompanied by Enid Neptune, Associate Professor of Medicine to discuss studies on how the tobacco industry is attempting to manipulate younger minds.

There are 1.3 billion tobacco users worldwide and every four seconds tobacco takes another life. Support World No Tobacco Day and join us in being tobacco-free.