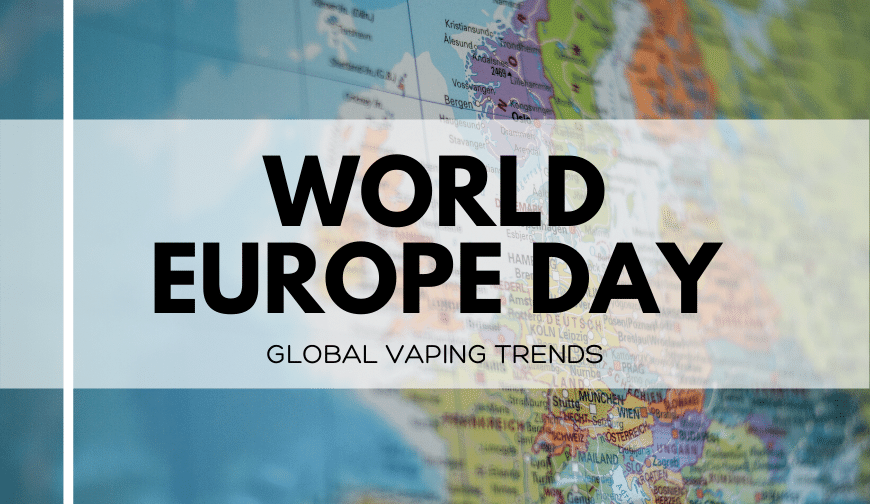 What is world Europe Day?

This bank holiday weekend marks the anniversary of the Schuman Declaration. In 1950 the first steps were taken to create the European Union, celebrating peaceful cooperation across the continent. Each year thousands of people organize events, concerts and exhibitions promoting the work of the European institutions to celebrate unity across the globe. To commemorate the occasion we thought it would be fun to do some research into vaping habits around the world. This year will differ from most with the COVID19 pandemic, with all public events being cancelled due to the fast spread of the virus. So today we will be looking into which flavours are popular across the globe, which countries support vaping and what will happen to vaping after leaving the European Union.

“The United States, United Kingdom and France are the biggest markets. Vapers in the three countries spent more than $10bn (£8bn) on smokeless tobacco and vaping products in 2018.”

Worldwide, the top e-liquid flavours are: Tobacco, fruit, menthol and dessert, but which countries prefer which flavours? The choice can vary from person to person, however we have found that in England, menthol is extremely popular. France and Germany however, choose fruit as their go-to. Tobacco flavours are also very popular around the world, mostly chosen for those who want a similar flavour to cigarettes, to help with the transition to vaping.

In regards to the popularity of devices, all top vaping companies seem to stock similar products around the world, with pod mods rising in popularity over the past year.

Vaping rules and regulations around the world

Throughout the EU there is currently a ban on sales to people under the age of 18 and warning labels are also required. New regulations mean there is a maximum limit on the volume of liquid containing nicotine, as well as the maximum concentration of nicotine, which can be sold within the EU. Vaping is now prohibited on public transport, in hospitals and in airports, and additives such as caffeine within e-liquid are banned.

Is it safe to vape? Read more in this blog post.

Leaving the EU: What will happen?

On January 31st 2020 the United Kingdom left the EU after 47 years of membership to the union. The negotiations during the transition period are still ongoing and changes could be made unless there is an agreement.

“In the event of no deal, the UK government is introducing legislation to ensure that the policies and systems in place to regulate tobacco products and e-cigarettes will continue to function effectively and maintain continuity with current arrangements where possible. This approach means that there will be minimal disruption for citizens and businesses in relation to tobacco products and e-cigarettes.”

The Department of Health and Social Care

Can I take vapes on a plane?

While travelling during COVID19 has been banned, many are planning for summer holidays and booking flights while the costs are down within the EU and beyond. Many airlines allow e-cigarettes to be taken on-board in carry-on luggage, this includes small bottles of e-liquid (under 100ml) when taken in a clear bag. All batteries must be checked into hand luggage as they are no longer allowed in checked luggage. Vaping is still banned on flights, however many airports have smoking areas which are accessible to all.