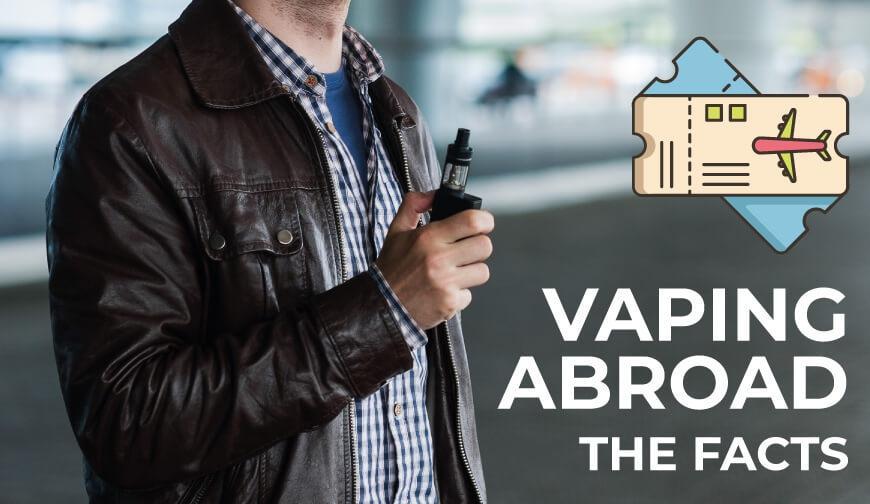 The rules for vaping abroad can be very different from the UK. Certain countries have restrictions in place that prevent the usage of the devices.

It’s worth noting exactly what restrictions are in place before travelling so you don't land yourself in trouble.

We’ve put together a list in which countries currently have restrictions on e-cigarettes.

Similar to the UK there are still restrictions on the usage of e-cigarettes in enclosed public spaces and on public transport. Using the devices in open spaces shouldn’t be an issue but it’s best to adhere to their laws and customs when visiting these following countries.

Legal to use, Illegal to Sell

In other countries, it’s perfectly acceptable to vape in designated areas but it’d illegal to sell e-cigarettes and e-liquid. Due to this, you might struggle to get accessories or juice abroad, so make sure you pack plenty within your case. Selling devices abroad would be a huge risk that could get you into trouble.

This extends to the following countries:

*Thailand has strict laws in place that heavily restrict the usage of e-cigarettes in public areas and often impose hefty fines. It is forbidden to import, export and sell e-cigarettes kits - if caught doing this you could face huge fines or even imprisonment.

For the most part, usage of e-cigarette devices is widely accepted, but only when used in designated areas.

While vaping is a reasonably acceptable alternative to cigarettes, there are still countries that ban the items, which extends to using them whilst there.

If ignored, this could get you in serious trouble as they are viewed as prohibited goods. If travelling to any of the countries below, you may want to consider looking at nicotine replacement therapies to curb any cravings.

Below is a list of countries that e-cigarettes can categorically not be taken:

*Vaping in certain states of India is legal, however, six have banned the use of e-cigarette devices which extends to Jammu, Kashmir, Karnataka Punjab, Maharashtra and Kerala. Strict laws are in place for those who attempt to smuggle and use the devices within these states.

Each banned area does have laws in place and, if caught, you could be fined hundreds of pounds or even imprisonment.

E-cigarettes have become a popular topic in the UK with numerous leading figures showing support for the devices, including Public Health England, the NHS, Cancer Research UK, Royal Society of Public Health and ASH.

Sadly, this support doesn’t continue in neighbouring countries, which is something every vaper needs to be aware of before travelling overseas.

If in doubt, check the government’s website you are travelling to for clarity and, if restrictions are in place, make alternative arrangements that will help curb any nicotine cravings.

For a stress-free holiday, always check the countries stance on vaping as well as airports - see our blog Travelling with your E-cigarette, for more information.