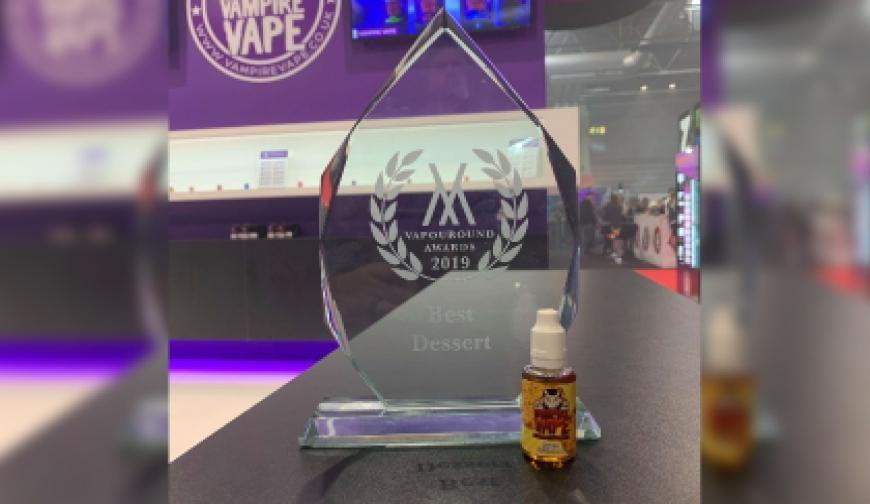 We are proud to announce that Vampire Vape took home the Best Dessert flavour at the Vapouround Awards on Friday 3rd May. The night’s events were greatly celebrated as one of our new flavours, Sweet Lemon Pie took home the award.

The 10ml flavour was released mere months ago but has since caught the attention of the judges at Vapouround. This delicious flavour features a sweet lemon mix with a buttery biscuit base that entwines with the lemon, leaving a delightful taste behind.

Having been blind tested by the judges, Sweet Lemon Pie was voted the best beating multiple rival e-liquid manufacturers.

Managing Director Nathan Walton said: “Vampire Vape are really happy about winning the first award for a dessert flavour, Sweet Lemon Pie and we are delighted to have been recognised for this.”

The Vapouround Awards are one of the biggest events in the industry that celebrates flavours, devices, companies and leading individuals in the industry. This year, the esteemed event took place at the National Conference Centre in Birmingham.

Nathan went on to say: “As always, the Vapouround Awards didn’t disappoint, the food, magicians, light shows, music and overall experience was amazing. The industry is made up of so many amazing brands and manufacturers and Vampire Vape are proud to be part of everything Vapouround do.”

“Ashley from Strawberry Queen was amazing as usual and Paul and his team really pulled out all the stops to make this an evening to remember and we're looking forward to next year as Show Sponsors for 2020.”

Over the years Vampire Vape have won numerous awards with our famed flavour Heisenberg winning four Vapouround Awards. The addition of Best Dessert flavour totals nine awards for e-liquid flavours since trading in 2012.

This is a huge success for Vampire Vape, especially as Sweet Lemon Pie was only released to the public in April 2019!