The Truth about the Vaping Tax 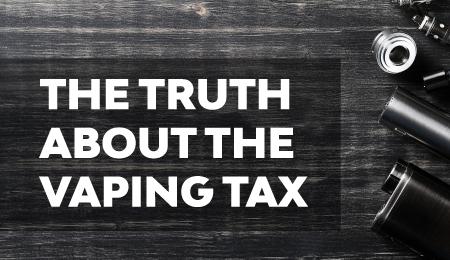 On the 21st August, The Sun reported that the Vape Tax had been canned suggesting there was a tax proposal in place.

Vaping has grown phenomenally since it was introduced in the UK with reports from Public Health England stating that over 2.9 million people in the UK now vape.

In turn, this has led to news outlets taking the opportunity to report on e-cigarettes and the vaping industry, and often these headlines, be it about exploding devices, e-liquid safety or the relative negative health benefits can be misleading.

On the 9th August he IBVTA released a statement, featuring comments from the Department of Health and Social Care and HM Treasury who confirmed there are no current plans to introduce a tax on vaping products.

Exchequer Secretary, Robert Jenrick reportedly wrote to industry figures and said: “We have no current plans to introduce a new tax on vaping products.”

Mr Jenrick further hinted that vaping products might be reclassified which could lower the VAT rate if the NHS rules them as an official treatment for smokers.

There have been many official bodies that have come forward, recognising e-cigarettes as the revolutionary option that could see the UK as tobacco-free in just 10 years.

Only last week the science and technology MP committee urged the government to relax the laws around vaping in public places following research that states vaping is safer than smoking.

Chris Snowdon, the head of lifestyle and economic affairs said: “The development of e-cigarettes has helped millions of people to reduce or completely quit smoking. To whack these vapers with a tax to try and deter them from vaping would be counterproductive and harm the nation’s health.”

Despite the reports from news outlets, there are no plans to introduce a vaping tax meaning all vapers can take a deep sigh of relief!