Study Shows E-cigarettes To Be An Effective Nicotine Replacement Therapy 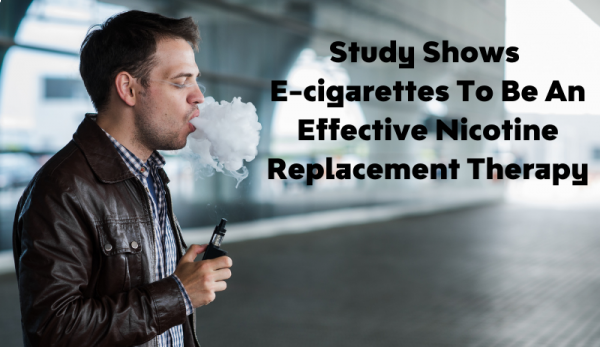 Study Shows E-cigarettes To Be An Effective Nicotine Replacement Therapy

As tensions rise overseas and constant contradictory arguments surround the vaping industry, a recent study conducted by the University of Salford has contributed to the case of e-cigarettes and vaping as an effective form of nicotine replacement therapy.

In a study with 614 subjects, 62% quit smoking with the help of e-cigarettes. It was also discovered that quitting was more likely in younger participants aged 18-24. Of those who still smoked tobacco at the end of the 4-week period, the number of cigarettes smoked per day had reduced by 37%.

Researchers stated that “Making the conservative assumption that all those not in contact at 4 weeks were still smoking tobacco, for every five people entering the scheme, three people stayed on the programme and reduced their cigarette smoking and one person cut out tobacco altogether. E-cigarettes appear to be an effective nicotine replacement therapy; however, further research is required to determine whether e-cigarette users are more likely to reduce their overall nicotine consumption in the longer term”.

The tobacco epidemic is one of the biggest public health threats the world has ever faced, killing more than 8 million people a year around the world. These findings promote the positive perception and the overall argument that e-cigarettes and vaping can help those wanting to quit smoking.