San Francisco Hits Back at Vaping 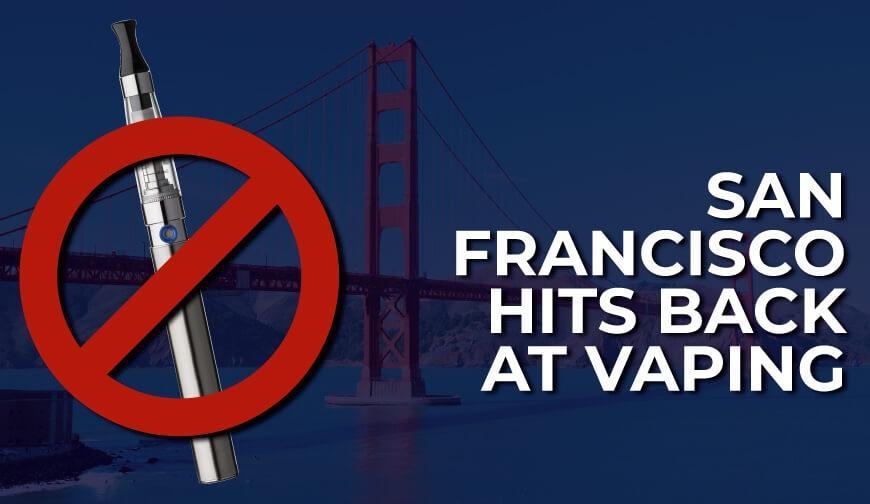 San Francisco has become the first US city to propose a ban on the sale of e-cigarettes and e-liquid until the effects of using the devices become clearer.

On Tuesday 24th June, officials voted to ban all sales and importation of the devices following years of debating on the increasing usage of e-cigarettes, especially amongst youngsters.

Vaping in the US has become an increasingly polarising topic of discussion. Anti-vaping groups have been formed to challenge the devices as more teenagers take to vaping. There have been many cities that have banned e-liquid flavours, which already includes San Francisco.

While the ban has been voted through the city’s mayor, London Breed still has ten days to sign-off the legislation, something which she has indicated she will do. If signed, the law will come into force seven months after the signing of the document.

In comparison, England, has a very different opinion on e-cigarettes. Having researched into the devices many leading officials and bodies have shown support of the devices.

The NHS in particular, endorse e-cigarettes in many of their stop smoking initiatives, including the nationwide Stoptober campaign.

In 2018 Public Health England found e-cigarettes to be 95% less harmful than traditional cigarettes. This was a key fact that saw a flurry of support which led to MPs lobbying the government for a divide in cigarette and e-cigarette laws.

Furthermore, MPs believe that vaping should be acceptable in public places which included transport stations, pubs and even workplaces. The House of Commons was to be at the forefront of this and if passed, it would become one of the largest workplaces in the UK that allows onsite vaping.

The Royal Society of Public Health reported that vape shops were a healthy addition to high streets after research found that on average the shops help 22,000 brits quit smoking per year.

Leading charities have also spoken out about the devices, with Cancer Research UK and ASH both promoting the benefits of vaping as a method of smoking cessation.

England has undoubtedly taken a different approach to vaping than that of America which is likely due to the number of youngsters taking up vaping in the US. News In Health reported in early 2019 that the uptake of vaping among 12th graders rose from 28% in 2017 to 36% in 2019.

Whereas in the UK, vaping in teens remains moderately low. Public Health England reported in March 2019,  that out of a studied group of teens 11.7% had tried vaping, but only 1.7% continue to use them regularly.

The San Francisco ban hasn’t been imposed yet, but if so, the following months could see the city and potentially neighbouring cities take a huge step back in the global fight against cigarettes.

What do you think about the proposed ban on e-cigarettes in San Francisco?