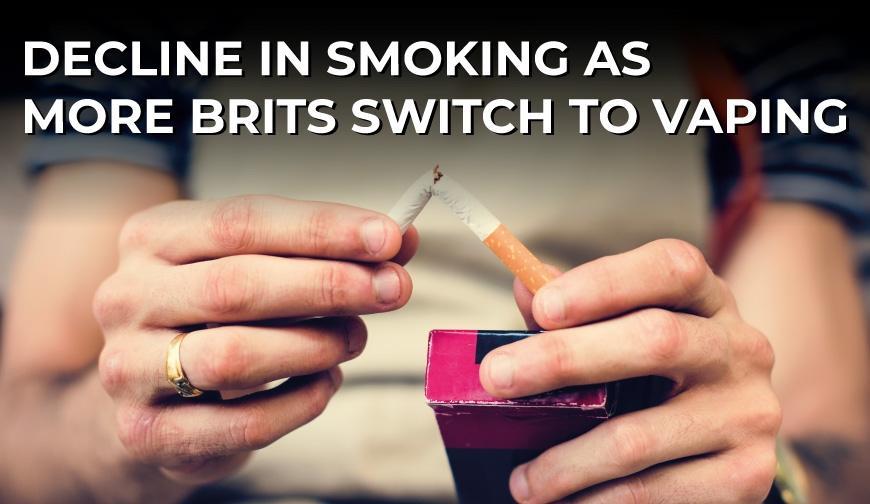 Smoking in the UK continues to decline as more Brits transition from traditional cigarettes to e-cigarettes, according to the NHS.

The report released by the NHS on Tuesday 2nd July found that there are around 1.8 million fewer adult smokers in comparison to 2011.

It was further reported that e-cigarette users have risen from 5.5% from 2017 to 6.3% in 2018 with more than half stating that vaping helped them quit smoking. This coincides with reports from the Royal Society of Public Health that claimed over 22,000 people quit with the help of e-cigarettes per year.

Following the report, Dr Caitlin Notely from the University of East Anglia’s Norwich Medical School said: “Hidden point of sales displays, plain packaging, and a harm reduction approach encouraging smokers to switch to vaping as a less harmful alternative to smoking, have all no doubt played important roles in our declining rates of tobacco smoking.”

The rise in vaping has seen a huge decline in smoking with the devices being claimed to be twice as effective as nicotine replacement therapies (NRT) after a study from experts found cigarette smokers more likely to quit when using e-cigarettes.

These studies have proved vital in debunking the myths around e-cigarettes and encouraging officials such as the NHS and Public Health England to promote e-cigarettes as a less harmful alternative.

A study by Cancer Research UK found that e-cigarette users have 97% less cancer-causing chemicals than traditional cigarette smokers. Further research found that, on average, a single person switching to e-cigarettes could save the government £74,000 per year.

Research by a team of experts also found that over six million lives could be saved in the next ten years if the majority of smokers made the transition to vaping.

This new evidence is another step forward for the industry that debunks the ever-rising myths that discredit the devices. Stop smoking initiatives have been around for decades, with many governments campaigning against tobacco due to the damaging effects that kill over eight million people each year, worldwide.

Giving up smoking isn’t an easy feat, but if achieved with or without aids, you’ll soon start to see the benefits – your body could start to recover and repair within 20 minutes of your last cigarette.

How do you think this new evidence will help the vaping industry?