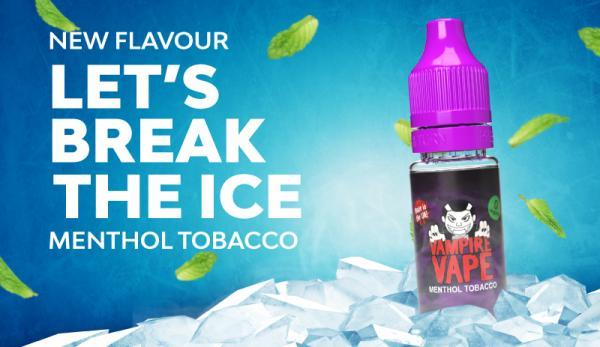 The ice has officially broken, and our new flavour has launched! We welcome Menthol Tobacco to our catalogue of flavours. Old-styled tobacco has been fused with a menthol hit to resemble the taste inspired by the traditional hand rolled cigarettes. A taste perfected and designed to help those who smoked menthol cigarettes to make the switch as an effective nicotine replacement.

Since May 2020 the sale of menthol cigarettes, dual cigarettes and rolling tobacco was abolished in the UK & Europe following the proposal of the ban in 2016. A study which reported on the perception of the ruling stated “16% of menthol smokers say they intend to quit after the menthol ban is implemented”.

Our latest e-liquid joins the numerous menthol favours here at Vampire Vape. From the award-winning Heisenberg, Ice Menthol, Berry Menthol and much more.