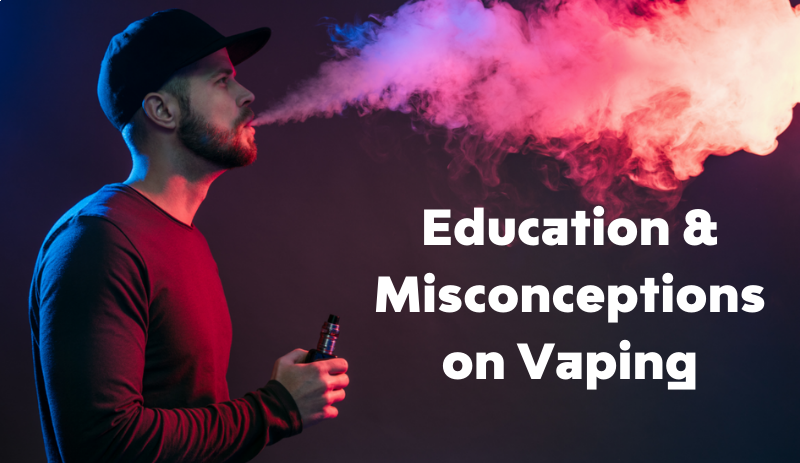 There are plenty of misconceptions and myths surrounding the vaping industry. Many of these false impressions exist due to the assumption that vaping has the same health risks as smoking cigarettes. However, Public Health England maintains its statement that vaping is 95% less harmful than smoking. Smoking is the leading cause of preventable illness and premature death in the UK and the tobacco epidemic is one of the biggest global public health threats, killing more than 8 million people a year.

Despite the increasing popularity of vaping, alongside the numerous studies supporting vaping as an effective form of nicotine replacement therapy, these misconceptions continue to create contradictory arguments and allow certain regulations to prevent those wanting to make the switch and benefit from the positive impact vaping can have on their health.

A frequent misconception is the health concern when comparing e-liquid vapour to traditional tobacco cigarette smoke. Cigarette smoke contains over 4,000 chemicals, 70 of which have known cancer-causing compounds and 400 other toxins, not to mention the cause of heart attacks, stroke, lung disease, gum disease among other negative health effects. Cancer Research UK found that e-cigarettes carry 97% less cancer-causing chemicals.

It’s important to understand the ingredients of e-liquid, the fluid that is heated up in a device and dispersed as vapour. E-liquid itself is made up of four ingredients which include propylene glycol, vegetable glycerine, flavourings and nicotine if required. The negative connotation here is the use of nicotine, which is where most flawed beliefs are connecting vaping and smoking cigarettes. Nicotine and nicotine strength is optional in e-liquid and it is necessary to debunk the myth that nicotine is harmful when it is the astonishing number of other chemicals in cigarettes, which are not present in vapour, causing the numerous health matters. Research from the Population Assessment of Tobacco and Health (PATH) showed that e-cigarettes are associated with lower nicotine dependence than cigarettes. In short, if people were more educated about the facts around nicotine, they would be more likely to have an accurate picture of the ‘supposed’ risk of vaping.

Another problematic issue for the vaping industry is the perception that second-hand vapour is harmful. The World Health Organisation (WHO) claims that 1.2 million people a year die globally because of second-hand smoke.  It has been established that people put vapour produced by e-cigarettes and vape devices in the same harmful category as smoke. Thus, leading many to believe that it’s equally as dangerous to others. NHS states that there is no evidence that vaping causes harm to others and Public Health England’s independent evidence review found that to date, there have been no identified health risks of passive vaping to bystanders.

Non-nicotine e-liquid fall under the General Product Safety Regulations 2005, enforced by local trading standards . Nicotine-containing vaping products are regulated more stringently through the Tobacco and Related Product Regulations 2016 (TRPR), which the government has committed to review by May 2021. Vape products are also subject to minimum standards of quality and safety, as well as packaging and labelling requirements.

Proper education around these flawed facts and perceived risks of vaping are essential to the main benefit of vaping versus smoking. For the general public, conflicting media and skewed reports are hindering the valid research studies, results and overall conclusions made by professionals around the world who support vaping as a main tobacco replacement therapy, and ultimately an answer to preventable illness and premature death.