5 Things Everyone Gets Wrong About Vaping 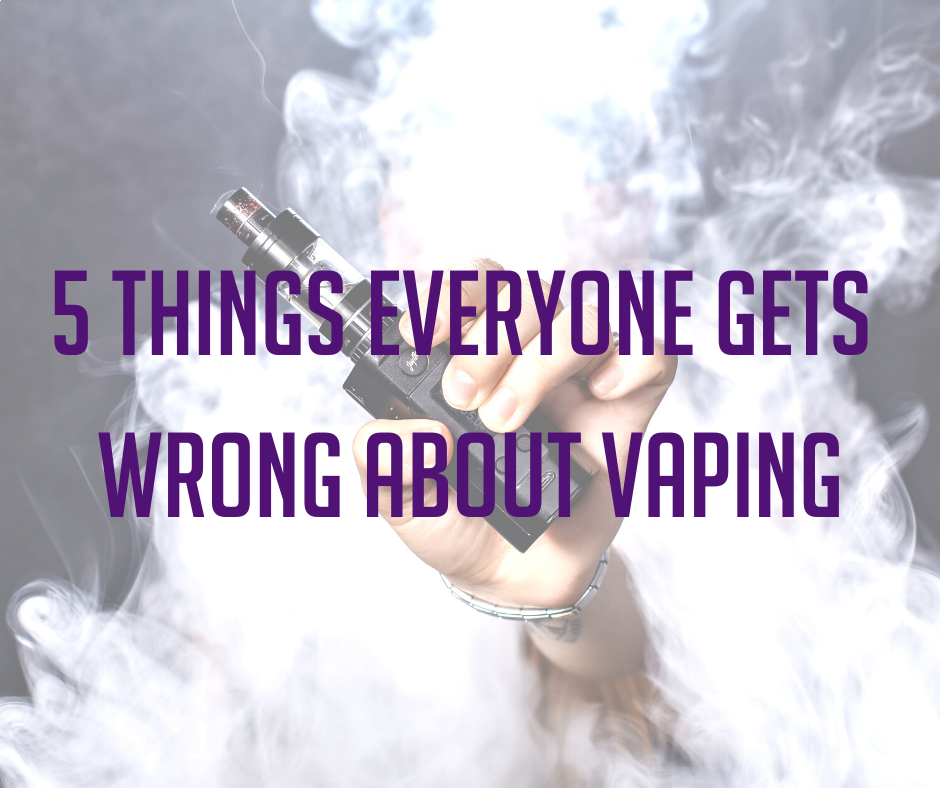 The Vaping Industry is constantly shadowed in myths and inaccurate information that has many people believing that e-cigarettes are just as harmful as traditional cigarettes. According to the IBVTA, only 17% of the public and 25% of current smokers in the UK believe e-cigarettes to be a healthier alternative.

This is a devastatingly low number for an industry that has support from leading organisations such as Public Health England and the NHS.

Following research, we’ve found the five most common misconceptions on vaping, and we’re giving you all the information as to why they are wrong!

E-liquid is Harmful (Is it though?)

Just a few months ago, horror stories erupted across the globe, following sudden deaths in America that were linked to vaping. However, these were quickly debunked by Public Health England official Martin Dockrell on BBC Breakfast as it came to light that people were vaping cannabis liquid which was causing these deaths.

Unlike most countries, the UK has very tight laws on the manufacturing of e-liquid, insisting that any flavour be screened by third-party laboratories to ensure they meet TPD requirements before they can be sold in the UK market.

E-liquid can have up to four ingredients, the core two being Propylene Glycol (PG) and Vegetable Glycerine (VG) which are found in many food and pharmaceutical products. Alongside this, flavourings and nicotine are added to the mix, nicotine being optional.

At Vampire Vape we use the highest quality of ingredients and have products tested both in-house and by a third-party laboratory and only then will Vampire Vape e-liquid leave the Darwen HQ.

Another misconception is believing that e-liquid contains anti-freeze, which is untrue. Some e-liquids contain a single ingredient found in anti-freeze, Propylene Glycol. This ingredient is also found in foods, medicines and many other products as it helps to keep them moist. Furthermore, PG has been investigated by scientists since the 1940s and is considered safe to inhale and swallow.

For more information, see our blog on What is E-liquid.

Second-hand Vapour is Harmful (Is it!?)

A problematic issue for the vaping industry is the perception that vaping is the same as smoking. Copious amounts of research have found that e-cigarettes are a less harmful alternative, with Public Health England confirming that they are 95% less harmful.

It’s a known fact that second-hand smoke is dangerous to others, with the World Health Organisation (WHO) claiming that globally, 1.2 million people per year die as a result of being exposed to second-hand smoke.

Due to this, many believe that second-hand vapour is equally as dangerous. Again, this is untrue, studies by the NHS debunked this, and in early 2019, new information from the California Department of Public Health (CDPH) reaffirmed this after a landmark study.

During the study, the CDPH confined second-hand vapour in a non-ventilated room and then tested the air for toxic substances. Over 20 chemicals were tested for, but none could be detected, once again concluding that second-hand vapour is harmless to others.

E-cigarettes are Prone to Exploding (Are they?)

Many myths in the vaping industry stem from exaggerated stories that suggest a person was injured directly because of vaping. Some have even covered exploding devices, which often relates to a vaper using an unregulated mod that has been incorrectly built or a vaper trying to customise a prebuilt device.

E-cigarettes are complex electrical devices which require extensive knowledge on building and fixing such items – something which we do not recommend!

In recent years, vaping has become a popular alternative to cigarettes in the UK with an estimated 2.9 million Brits using the devices.

Due to the continuing rise, multiple e-cigarette manufacturers have entered the market, producing devices that meet the needs of beginner, intermediate and veteran vapers.

Leading manufacturers such as Smok, Aspire, Innokin and VooPoo, to name a few have spent years developing technology to provide users with a safe device that comes with protective features. These often include short circuit, overheat, overcharge and over-discharge protections.

Buying from reputable sites, like Vampire Vape, ensures you are buying tried and tested devices that have met the industry standards. In doing so, you can vape, knowing your device comes with a safety guarantee.

Vaping is Addictive (Are you sure?)

An optional ingredient in e-liquid is nicotine, which is an extremely addictive substance that makes it extremely hard for people to quit smoking.

Nicotine isn’t a risk-free substance, but it isn’t the high-risk element in cigarettes.

Traditional cigarettes are a harmful cocktail that features health defying substances such as carbon monoxide and tar. These have been linked to cancer and heart disease among many other illnesses.

A fundamental positive of e-liquid is the ability to reduce nicotine levels gradually. A study by BMJ in 2013 found that gradually reducing nicotine brings down the level of addictiveness and thus help cravings subside.

The Vaping Industry isn’t Regulated (Would that even be legal?)

The vaping industry has been scrutinised time and time again as both devices and e-liquid have been reported to cause harm. Such reports would suggest that the market isn’t under scrutiny.

In May 2017 TPD requirements were introduced into the UK market, which meant all products must adhere to strict rules and stringently follow procedures so that only the highest quality of products entered the market.

E-liquid was especially scrutinised, and as mentioned above, each flavour must undergo specific tests before it could enter the market.

Furthermore, vaping in general, has been reviewed and researched by prominent bodies and academics who have found that e-cigarettes have a positive effect on reducing smoking in the UK. The Science Media Centre reported that e-cigarettes might help more the 50,000 smokers to quit in England each year.

Director of the Tobacco Research Unit at Queen Mary University of London, Professor Peter Hajek said: "This represents an important addition to evidence that already exists from multiple sources showing that e-cigarettes are helping smokers quit."

The Vaping Industry may always attract debate but breaking down the myths, outlining the facts and sharing from official sources will help increase positive awareness.

As awareness and knowledge of devices become easily accessible, the link between traditional cigarettes and e-cigarettes will start to break. In doing this, vaping will become more acceptable in work and public places, encouraging more people to make the switch.

What’s the most common vaping myth that you find yourself explaining?